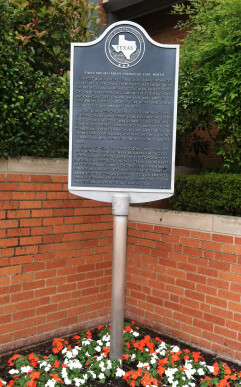 The history of First Presbyterian Church parallels the development of the City of Fort Worth and Texas Christian University. In October of 1870, the Presbytery of Central Texas of the Presbyterian Church U.S. (Southern) named a committee to look into the formation of a new church in Fort Worth. Five to ten Presbyterians had been gathering regularly in a room over Knight's Livery Stable at 3rd and Calhoun Streets. They were organized as the First Presbyterian Church (FPC) on May 25, 1873. In 1877, the church called its first pastor, the Reverend W.W. Brim, and built a small frame structure on Jones Street, between 1st and 2nd Streets. In the summer of 1878, a young man by the name of Stevens, a recent graduate of Trinity University with plans to attend seminary, came through Fort Worth on horseback selling magazine subscriptions. He stayed at the Daniel Hotel and learned of the hopes for a new Cumberland Church. He was invited to stay in Fort Worth and preach to the small congregation, and on September 15, 1878, the Cumberland Presbyterian Church of Fort Worth was organized. Stevens immediately approached the membership and raised $1,500 for the first building to be built at 5th and Taylor Streets.

Dr. Robert F. Jones was called as pastor on Sept. 9, 1944, and served until his retirement in 1979. Membership grew more rapidly in this period than at any other time in the congregation’s history.

A Move to Penn Street

After Dr. Bohl's resignation in 1996, a nomination committee put together an interim team of ministers to provide leadership until a permanent Pastor and a staff of Associate Pastors could be secured. This team was headed by Senior Interim Pastor John Ed Withers, and Associate Interim Pastors John T. Conley and Sandra Kern. Their expertise and guidance during 1997 and 1998 enabled the congregation to move forward during this time of transition.

From 1998-2005, Rev. Dana C. Jones led FPC in a period of membership growth and community outreach, resulting in a New Church Development in Aledo and the revitalization of Hemphill Presbyterian Fellowship. He also led the church in a visioning process that led to a master plan and successful Capital Campaign in 2005. Jones concluded his ministry here on July 31, 2005, to accept a call in Sewickley, Penn. The Rev. Karl Travis was called as Head Pastor in 2007 after serving congregations in New Mexico and Michigan. He served FPC until January 2019. During this time the church completed the addition of a new building at the Penn Street campus, designed and built a Columbarium/Memorial Garden/Labyrinth on the north side of the Penn Street campus, renovated and rededicated the Sanctuary, and expanded the staff and ministry with the addition of a Discipleship Coordinator, Communications Coordinator and Young Adult Director, all the while continuing to expand the scope and reach of Mission and Outreach that includes international partnerships and support of mission co-workers.

FPC Today and Looking to the Future

Several major mission projects and commitments are being realized. Community Crossroads, the church's Mission Center at 1516 Hemphill St., is being expanded as ministry needs have continued to increase in the areas of food distribution, clothing distribution, the Formula and Diapers ministry, the Dental Clinic, ESL classes, WOW (Worship on Wednesdays) along with a variety of other new ministries. Significant gifts from the church are also enabling renovation and expansion at the Presbyterian Night Shelter as well as a new Permanent Supportive Housing Initiative in partnership with the City of Fort Worth.